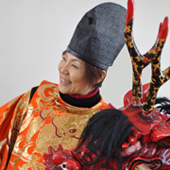 There’s a God for That

Optimism in the Face of Earthquakes, Tsunamis and Meltdowns

The Blessings of Kagura

Kagura is an invocation to the gods, a call to seat themselves among us. When performed at a gathering, kagura becomes a blessing to all who are present, and sets the stage for a communion between the spirit and earthly worlds.

Classical kagura has its roots in Shinto mythology, and is performed with a reverence befitting its sacred origins. Originally, kagura was performed as a religious reenactment of the myths of the Kojiki. This genealogic/sacred text (translated as “Records of Ancient Matters”) was first written down in the year 712.

Over time, the folk tradition of Iwami-kagura evolved from the classical form. Today, there are 33 of these stories, which are performed by troupes in the Iwami region of Shimane and Hiroshima.